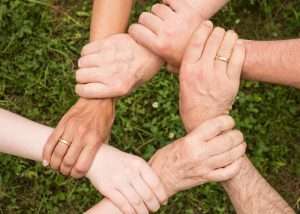 We had hoped that the road map to end the Covid-virus limitations would have been on course towards fulfilment, but its wind-up appears to be moving further into the blue yonder.   Unquestionably the achievements with the development and roll-out of the vaccines have been magnificent. Yet depression and despair now abound because of the onslaught of the delta or Indian variant.

Christians may be tempted to follow the current mood of doom and gloom and bury their heads in the sand – but we dare not. Do you remember that when the time was right God sent his Son?  What time? It was the start of an extended period of Roman tyranny. Before it had finished early Christians were being thrown to the lions in Rome. However, at the same time the goal of world evangelisation was being gradually but firmly unfolded.

Look at Matthew 24:14, This gospel of the kingdom will be preached in the whole world as a testimony to all nations and then the end will come.

Today it is no different. We, the successors of the early believers, are called to be active in the fight against Covid, but our commitment to the goal of spreading the Good News of Jesus must continue undiminished. These thoughts should give added focus to our prayer life.

It is always stimulating to read of people in the Bible whose life-story has been changed by prayer.   Moses was a great leader bringing the children of Israel from slavery in Egypt and directing their movements across the Sinai Desert towards the Promised Land. Accomplishing this objective depended critically on prayerful conversations between Moses and God; many of them on mountain tops. The main body of the Israelites grumbled a great deal and one of their gripes was that Moses was frequently missing from the camp. Little did they realise that their future was being planned at the highest level.

There is an intriguing account of a female gatherings beside the river in Philippi on Saturdays.   They must have become the talk-of-the-town, because new-arrivals Paul and his mates heard of them and wanted to know more. Why did this group merit such attention? Well it was simply that they met to pray.  Imagine the startled faces the next Saturday when this all-male squad turned up and just sat down! We are left to surmise how the ice was broken. We are, however, told that Lydia and her household became believers–a breakthrough–the first converts in Europe. Christianity had become inter-continental!